Since February 2022, Ukraine has been roiled by Putin's hostile military invasion. Despite the heavy humanitarian and financial toll, the Ukrainian banking system has demonstrated remarkable operational and economic resilience in the face of existential threats to its homeland. We’ll take a look at the underpinnings of this resilience with a view toward the future for Ukrainian banking and the global economy.

A history of resilience

If Putin's 2022 invasion has been a test of strength, then the Ukrainians have been studying for years. The current resilience of the Ukrainian banking system is rooted in the geopolitical turmoil it has continually overcome since 2014.

The Russian annexation of Crimea in 2014, while tragic in its own right, served as a dry-run to prepare the banking sector to operate under significant military distress. In the wake of a speedy armed occupation, financial institutions were forced to relocate operations, adapt to virtual operating norms, and create contingency operational plans for a variety of emergency scenarios.

At the same time, the 2014 election of Petro Poroshenko hailed a new political era that sought to replace the Putin-friendly cronyism of the post-Soviet bloc with Western-oriented free markets and democratic institutions. As one aspect of a broader political reform programme, the new regime passed a sweeping set of banking changes to pave the way to systemic sustainability. The programme included a complete overhaul of corporate governance, liquidity risk assessments, stress testing, corruption legislation, and digitalisation initiatives that brought Ukraine up to speed with EU neighbours.

The banking reforms delivered many of their intended results. Initially, the new regulations culled or consolidated half of the country’s banks that were unprofitable, corrupt, or unfit to continue. The surviving banks grew to record profitability by 2021, even in the face of pandemic headwinds.

Early shocks to banking and agriculture

While the operational resilience of the system is remarkable, the invasion has nonetheless inflicted serious costs both to Ukraine and the global economy. In Q1 2022, Ukrainian banks posted their first loss since 2017. Net consumer loans declined more than 8% between March and May 2022, and the hryvnia depreciated more than 5%. 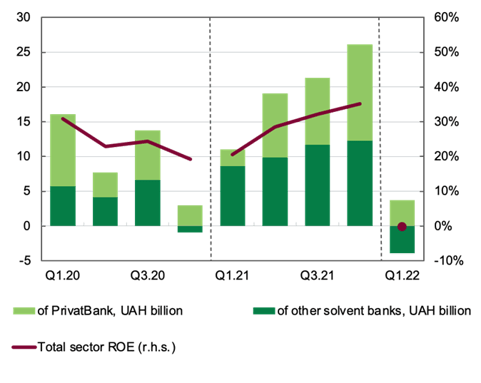 The greatest economic challenges on the horizon relate to the agricultural sector, where declines in net exports are damaging both the Ukrainian economy and global prices. Aggregate Ukrainian agricultural exports are forecast to suffer 25% losses in 2022 as a direct result of captive ports, labour emigration, physical asset loss, and increased production costs. Additionally, the supply of such crops is doubly constrained; Russia is responsible for a majority of global exports of these commodities alongside Ukraine, so between sanctions and Putin’s political maneuvers, supply chains can be held hostage. The steep decline in output of core crops like wheat, sunflower seed oil, corn, and barley have already driven up global prices by 2-3x. The dynamics causing the rise are entrenched, and the trend is not likely to end soon.

Bouncing back and looking ahead

Despite the uncertain outlook of the military conflict, hope remains both for the banking system and the people of Ukraine. PrivatBank, the nationalised bank of Ukraine, reported an 8% increase in both payments and volumes in April ‘22 compared to '21. Net corporate loans have increased 4.1%, despite foreign exchange headwinds that have depreciated the hryvnia. In Q2 2022, 79% of bank branches were fully operational; outside of the besieged eastern regions in Donbas and Kherson, 90%+ of branches are open, and in the capital city of Kyiv, 75% of branches are open. 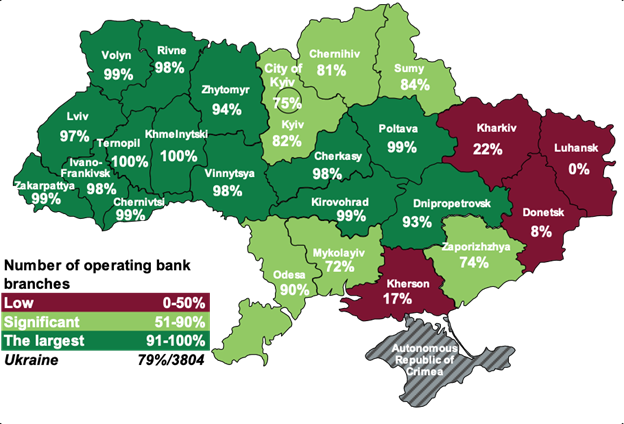 Resilience is the new normal