The good times are gone. As public markets wrestle with a perfect storm of macroeconomic risks and difficult national and regional events, the bull run of the past decade shows signs of coming to an end. The emergence of distressing signals for equities and economies poses a simple question: what lies ahead for credit markets?

The rise of debt and non-financial corporates

Understanding the current credit ecosystem requires a look at the recent past, which tells a story of significant and rapid debt expansion. From 1997 to 2020, global indebtedness quadrupled from $70tn to $282tn, with global debt now equivalent to 3.5x global GDP. 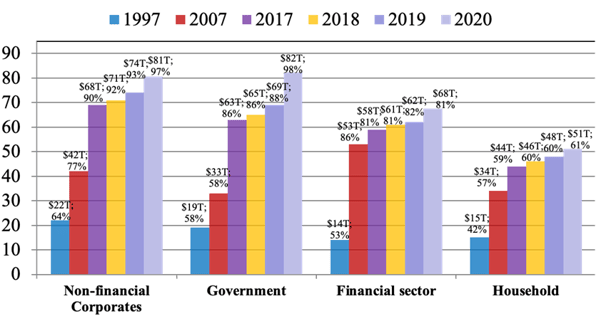 The most noteworthy trend is the growth in non-financial corporate lending. Throughout the 20th century, bank lending was consistently 50-100% larger than non-bank lending. However, the balance between the two flipped at the turn of the century with the rise of leveraged buyouts (LBOs) by private equity funds - the surge in LBOs continued despite the dotcom bubble in the early 2000s. The increase in regulation after the financial crisis in the late 2000s further fueled the rise of non-bank lending. Today, non-bank lending is twice the size of bank lending.

Recent trends within credit markets suggest the top of the market is likely behind us, with a period of slower growth and risk correction on the horizon.

Recent declines in major indices like the Dow, Nasdaq, and S&P 500 have brought public equities to multi-decade lows as they enter official bear market territory. The signals and outlook for credit markets are also quite sobering. 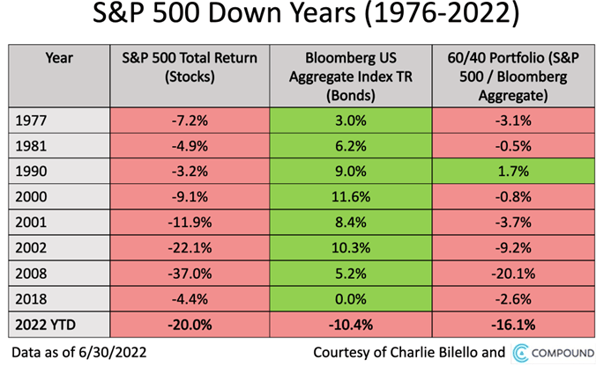 High yield (HY) bonds represent the riskiest class of bonds. Analysing their growth gives insight into overall market risk borne by lenders. During the pandemic, high yield bond issuances exceeded any period in history, growing 31% each year to $460bn by 2021. During this period, rates and spreads rose rapidly; from December â€˜21 to May â€˜22, both HY and treasuries rates increased by several percentage points, while the HY bond spread has increased from 3.4% to 4.0%.

There are three concerning signals underlying this trend. First, the overall magnitude of risky debt in circulation has increased at a much higher rate than GDP growth. Second, yields have increased, signaling that, on average, each individual bond is considered riskier. Third, bond spreads increased, which indicates that price of high-risk debt has grown faster than Treasuries, traditionally the safest asset class.

In 2022, these trends began to reverse; in Q1, US high yield bonds posted -10% losses and forced lenders to reevaluate their debt portfolios. As a direct result, lenders are becoming cautious of increasing their risk exposure and new HY bond issuances have dried up. The decline of new debt issuances not only slows economic growth, but also provides a clue that underwriters are fearful of a worsening scenario.

Default rates, however, tell a nuanced story. The pandemic caused HY default rates to spike to 6.7% in 2020, more than double the rate in 2019, while large-cap and mega-cap bankruptcies reached record highs. In 2021, however, we saw a sharp decline in the default rate to 0.5%, in large part due to government support. Consensus estimates for defaults in 2022 are currently below 2%, suggesting an increase in risk that is cause for concern but not panic.

The zombies are here

An alarming threat to market health is the rising trend of â€œzombieâ€ firms. Zombies are companies that cannot cover 3 years of interest expenses and have a high probability of default; they persist like dead men walking. The rise of zombies pre-dates the pandemic; since 1990, zombies have more than tripled in prevalence, growing from 2% to 7.5% of listed companies in the worldâ€™s 20 largest economies. 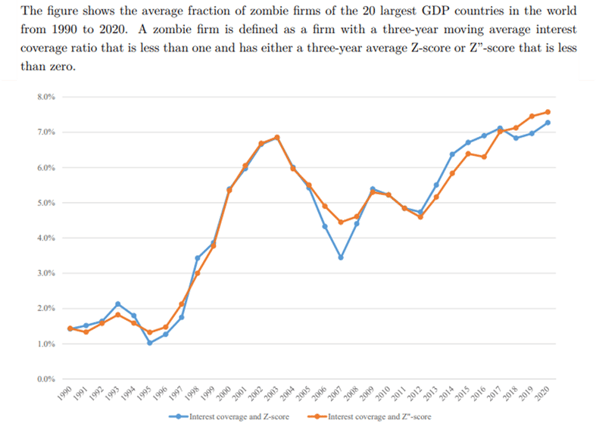 What can we learn from zombies? First, their prevalence correlates with economic prosperity. Credit markets are willing to tolerate greater risks in search of higher returns during cash-rich growth cycles, when easier money and optimistic forecasts can hide the sins of struggling companies. Many zombies then â€œdie outâ€ through bankruptcies following market corrections, turnarounds, or acquisitions. For example, the software boom in the decade-long run-up to the 2001 dotcom bubble witnessed a 700% increase in the prevalence of zombies. When the bubble burst, roughly half of zombies â€œdiedâ€.

While there is no definitive zombie benchmark that denotes a stress signal, there are now more zombies than ever before.

The mounting set of data points indicate that the credit cycle is moving from a benign phase into a mildly distressed phase. Equities markets have been roiled in Q2, and the strong correlation between equities and credit markets indicates a challenging period ahead for debt. While default rates have not spiked and consensus forecasts are not anticipating a significant wave of defaults, lenders are reacting to high-risk exposure and weak economic forecasts by curbing new debt issuances. Worryingly, there are now more zombies than ever before, suggesting that the market is artificially keeping ailing businesses alive and is due for a correction soon.

An overview of non-bank lending in Europe

Non-bank lending, also known as direct lending, has long been a main feature of developed Western economies. The European market has grown particularly quickly in the past several years, closing the gap to its American counterpart. However, the impending global downturn threatens its trajectory of continued expansion, and this rarely-tested segment of the market poses a uniquely murky challenge for credit observers.

Since 2015, the Europe private debt market has grown at a healthy rate of 12% per year, with total lending nearly doubling since 2015. This growth has been driven by its perception as a safe, attractive asset class based on the experience of early lenders and comparisons with American markets. Direct lending has consistently yielded 6-8% returns â€“ a premium compared to traditional bank debt, and a competitive rate compared to equity markets. Meanwhile, investors feel greater confidence in the risk exposure of these direct lending vehicles since loans are entirely bespoke to the debtor and often involve more performance-related covenants than leveraged loans. Creditors have turned to direct lending as a reliable and appealing asset class.

The market is geographically concentrated, as the UK, France, and Germany account for 72% of deal volume. In most other ways, however, the market is characterised by fragmentation. Regulation of non-bank creditors varies significantly from country to country, even within the EU. Market share is highly fragmented amongst dozens of non-bank lenders, despite the market presence of multinational juggernauts like Ares and BlackRock. Non-bank lenders also tend to specialise by niche segments and lending products, adding an additional layer of fragmentation to the market.

Evolving conversations around climate change have thrust ESG regulation into the spotlight, though fragmentation is again a defining feature of this aspect of the market. For example, many funds have sought to increase ESG incentives, hired dedicated ESG directors and included ESG-related performance ratchets in their terms. However, ESG metrics are notoriously difficult to standardise and tracking is beset by a lack of uniformity, so funds struggle to monitor ESG success both within their portfolios companies and across competitors.

Because of regulatory variation within European countries, the outlook for the non-bank lending system is unclear as we enter a period of sustained economic pressure. Bankruptcy and default protocols vary significantly both by loan and by country, making forecasting an especially challenging exercise for scenario planners and stress testing that relies on traditional tools.

Beyond market machinations, non-bank creditors are faced with an existential question: will lenders even want to take the keys to failing businesses in the event of default? Direct lenders have more skin in the game than traditional financial institutions, which makes them more likely to support their portfolio companies in the event of a downturn. The question, however, is what exactly that support will look like.

PE firms are skilled in short-term strategic management of their distressed asset, but operational overhauls pose a challenge of an entirely new magnitude. A multitude of non-bank lenders will have little experience in the strategic recovery and management of assets. We are clearly approaching uncharted waters where history provides little guidance to what might happen in the event of widespread defaults and asset seizures.

As has been the case with bank lenders in previous downturns, this new environment will likely shed light on which non-bank lenders have operated beyond their capabilities and which entities have been swimming in full gear.

Simon is a writer and strategy consultant covering tech, startups, and culture in Latin America. Formerly a Bain management consultant and startup chief of staff, he now writes at Technopoly. He is based in Lindon and Mexico City.

Resilience is the new normal